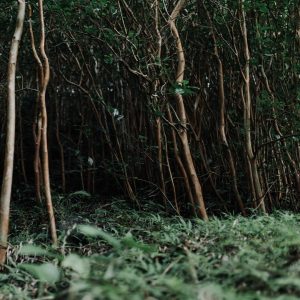 Many species now travel around the world on boats, airplanes, and cars, but there are some non-native species that arrive in their new locations, either intentionally or unintentionally, and then behave in a way that is defined as causing harm to the environment, economy, or agriculture. They usually produce lots of seeds/reproductive material, don’t have any predators, and have some kind of advantage like producing chemicals through their roots that disrupt the growth of other plants. Invasive species usually find a weakness in the ecosystem and then fill that gap and run with it. Over time, nutrient and water cycles are changed, and biodiversity decreases.

By most accounts, invasive species are considered “bad” and native species are considered “good”. As is typical in life, categorizing things as “good” versus “bad” doesn’t speak to the complexities present. A great question to ask might be, “What function is that species providing in the ecosystem?” Instead of trying to kill the invasives, what do we need to add to the ecosystem in order for it to become supportive of rich biological diversity? If the invasive Java plum trees are removed from streams, what will hold the streams from eroding? If the invasive banana poka (Passiflora mollissima) is eradicated, what will the native ʻiʻiwi bird feed on?

Did you know that all of the invasive species highlighted in the Savage Kitchen app provide us with not only food, but also have well-researched medicinal qualities? Check out our eBooks here for a deep dive into the medicine.

Abundance species is part of the terminology used at Savage Kitchen for invasive species, as these are typically the most abundantly found resources in our environment. More than just resources, they are providing a function in a degraded ecosystem. Climate change has laid bare that future ecosystems are emerging, which are better adapted to global climate change effects like increased CO2. Indigenous people used to tend the land with complex knowledge-bases that increased their fertility and biodiversity, and have long been systematically removed from those roles. As we shift our consciousness to know that land management strategies using herbicides, biocontrols, pesticides, and fungicides in the massive quantities used thus far, further destroys ecosystem function. How can we work with the abundance species to create greater biodiversity, greater resiliency, during massive shifts in our climate?

Nature always works towards balance. There is no going back to the idealized native landscapes of the past, but we can move in the direction of supporting and building diversified life. True land restoration begins in our own homes, with all of the daily decisions that affect the ecosystems of which we are a part. At Savage Kitchen we promote eating invasive species because it is relationship-building between yourself and land, provides nutrient-dense wild foods that strengthens local food systems, and builds emergency preparedness. You learn to identify abundance species, work to prevent their further seed dispersal by eating them, and live with the abundance that the land provides and not within a framework of scarcity. The abundance species also allow people not indigenous to that place a way to connect with place, while leaving culturally significant native species for those with unbroken chains of connection to them. Eat the invasives! Eat the abundance!