Haole Koa is native to southern Mexico, Central America, and northern South America. It is an aggressive colonizer and nearly everyone living in Hawaiʻi has Haole Koa growing nearby, as well as many people living in tropical and subtropical locations around the globe. Leucaena leucocephala is its scientific name, and it is also known as White Leadtree, River Tamarind, and Jumbie Bean. Haole Koa, in Hawaiian, refers to the native Koa tree (Acacia koa) and haole meaning foreign, as these two different tree species look similar when they are young. The IUCN (International Union for Conservation of Nature) lists it in the top 100 most invasive species on the planet. Haole Koa is used in jewelry making, firewood, and has been used as high protein food and medicine since the time of the Mayan civilization.

Haole Koa contains a mildly toxic amino acid called mimosine, therefore some basic precautionary actions such as soaking in water are required in food preparation. See below for instructions. If you don’t treat it, then don’t eat more than 10% haole koa in your diet.

Haole Koa is a thornless shrub or small tree, growing from 3-15 meters (10-50 feet) tall. The trunk and branches are beige to light brown in color with alternate branching green bipinnate compound leaves. The tiny green leaflets, known as pinnae, are only a few millimeters wide and around 10mm (0.5 inches) long. When flowering, the round white pompom flowers are easily identifiable. Seeds are teardrop shaped, with green seeds larger than dried brown seeds. Haole Koa can be found in mesic (dry) forests, jungle, low tropical shrublands, and the urban landscape.

Haole Koa produces an abundance of thin pods that start out light green, and then darken to brown, with a papery texture once fully dried. The green seeds are visible from the outside of the pod, which has distinguished ridges, and range from thin to plump. Fully ripe green seeds mature to the size of a pepita or pumpkin seed. The dry pods open easily and contain hard, dark brown, teardrop-shaped seeds. Before splitting open, the brown pods can sound like a rattle when shaken, or a distinct rattling sound when the wind blows through them while still hanging on the tree or shrub. Haole Koa often forms dense thickets and alters the ground underneath them so that other plants can’t grow as easily.
LOOKALIKES

There are a number of very similar leguminous shrubs and trees that might cause confusion as well as herbs that can look like Haole Koa to the beginner.   Remember, you only need to know all the details for correctly identifying Haole Koa and then all other plants that don’t fit those details are not Haole Koa and should not be eaten. There are some common plants in Hawaiʻi that can be mistaken as Haole Koa, contact me if you are interested.

Haole Koa is prolific in lowlands and lower mountain slopes below 1,500m (5,000 feet), in areas without human development and in the urban landscape. Tolerant to both drought and severely wet areas, it is widely found in warm temperate to tropical zones around the globe.

Begin by asking permission. Only take what you will use. It is of the utmost importance to prevent the spread of Haole Koa seeds, so harvest the pods mindfully by pulling or cutting them off their branches directly into a bucket with a sealing lid or bag. Fully mature green seeds, as well as the dried out brown seeds, are edible. If harvesting a large amount of Haole Koa seeds you might consider putting down a tarp to collect any that fall below. Be extra careful to check for any seeds stuck in shoes, clothing, hair and bags to prevent the further spread of this invasive species. The young leaf shoots, leaves and unopened flower buds are also edible and are pulled off easily. Green pods, whose seeds haven’t fully matured, can also be eaten. Be mindful of herbicide use, especially along roadways, and harvest only pods free of mold and severe insect damage.

Haole Koa is always in season! Leaves are available year-round, with the unopened flower buds, young pods, mature green seeds, and dried brown seeds cycling many times throughout the year.

You can store your fresh harvest in the fridge, but it’s best to get them soaking in water right away. Although everyone is different, it’s estimated you can eat 10% of your daily calories in untreated Haole Koa. However, you can certainly eat more than 10% if you treat it to either decrease or fully remove mimosine. Leaves, flower buds, immature green pods, green seeds and brown seeds are each soaked in water for 36 hours at room temperature. Bubbles will form on the surface and the water will thicken, so it’s good to drain off the water, discard it, rinse, and refill with fresh water multiple times. More mimosine can be removed if immature green pods are cut into pieces, and the same for green seeds and brown seeds (brown seeds swell after a couple of hours in water and can then be chopped or ground and returned to fresh soaking water). When preparing brown seeds, be sure to remove any small seeds, ones that float to the top of the water, or any with visible insect or mold damage. When opening pods with plump green seeds inside, it can help to cut the tip off at an angle and then pull the two sides of the pod apart; discard outside of pod. It’s hypothesized that cooking Haole Koa in cast iron can reduce mimosine, and that adding some Haole Koa leaves to the container when soaking seeds can reduce mimosine (mimosinase is an enzyme found in Haole Koa leaves that breaks down mimosine). After water treatment, boiling, steaming, roasting, and fermenting can further degrade mimosine.

Haole Koa contains a mildly toxic amino acid called mimosine, along with tannins and other anti-nutrients. Therefore, some basic precautionary actions like soaking in water for 36 hours and additionally boiling, steaming, roasting, or fermenting, can remove mimosine.

Leaves, unopened flower buds, young green pods, and both the green and brown seeds have a unique and slight garlic flavor with a nutty texture. Brown pods are odorless, fresh white pompom flowers are sweetly aromatic similar to clover, and green pods and leaves have a light grassy aroma when crushed. 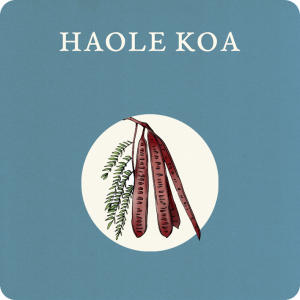