Spanish Needles is native to the tropical and subtropical Americas. It can now be found in tropical and subtropical locations around the globe, even extending into temperate regions. Botanists go back and forth on how to classify Spanish Needles, as Bidens pilosa and Bidens alba are so similarly related that they can be used interchangeably in the recipes and for dropping pin locations on the map. Known in Hawaiian as kinehī, Spanish Needles is used in the treatment of over 40 diseases. Antibacterial, anticancer, and antimalarial are just a few of its powerful medical applications. There are 19 native endemic Bidens species found in Hawaiʻi and nowhere else on the planet.

Spanish Needles is an herb, growing up to 6 feet (30cm-1.8 m) tall. Leaves are compound, usually with 3-5 leaflets (up to 9) that are deeply lobed. The terminal leaflet at the end is always larger, and the undersides of the leaf are a lighter green. The stem is loosely squared, with ridges on it and oftentimes having small hairs. Leaves come off the stem in an opposite leaf arrangement, where they alternate 90º at each node (aka decussate). The edge of the leaves, known as the leaf margin, are dentate which means they have teeth facing towards the tip of the leaf.

Both Bidens pilosa and Bidens alba have yellow flower discs that are about 1 inch (2-3 cm) and sit atop branched stems. Both can have white flower petals, called ray florets, but the Bidens alba are much larger and give the flower a daisy-like look. Seeds custer into a pompom shape, with each individual seed an elongated brown/black achene around 1/2 inch (1-2 cm) long with a barbed fork at the end.

Spanish Needles grows in disturbed areas where the soil gets turned up and there is plenty of sunshine; for example, farms, gardens, pastures, roadsides, and urban areas.

Begin by asking permission. Only take what you will use. Harvest leaves and flowers by plucking, pinching off, or using scissors. If the plant, or surrounding plants, have gone to seed be mindful of getting seeds stuck on your clothing. If you are prepared to dispose of the plant, pull up from its roots and place into a sealed container so seeds aren’t spread during transport. Dispose of plant in a compost pile, or in the trash. 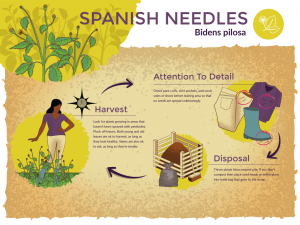 Spanish Needles grows year round in Hawaiʻi. Plants can be found in greater abundance during the rainy season, or when growing close to a water source.

Leaves and flowers are eaten. Wash leaves and use immediately, or place into a sealed container in the refrigerator for later use. Spanish Needles greens store exceptionally well in the refrigerator. If eating greens raw, tender young and vibrantly healthy greens are best. Preferred method of cooking older greens and to remove any strong flavors is to place them into boiling water for 5 minutes, then strain the water and squeeze greens once cooled before adding to your dish. If you wish to retain their bright green color, place greens into an ice water bath after removal from boiling water. Greens can also be dehydrated or fermented. Flowers can also be used in food preparation and will store in the refrigerator.

Leaves and flowers have a resinous smell when crushed, often smelling of pine. Hints of sage, tarragon, and strong notes of chlorophyll are said to come from the flowers.

Greens do not cook down as much as spinach, have a great mouthfeel after boiling, and lose much of their strong flavors after boiling.

Add spanish needles juice to any ordinary drink to make it extraordinary and therapeutic like this one below. 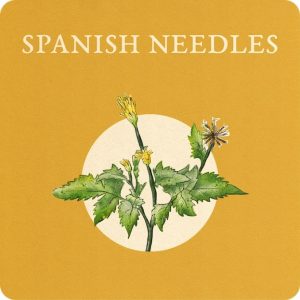