Java Plum originates from the Indian subcontinent and South Asia. Known as the “Fruit of the Gods” to Buddhists, Hindus and Jains, they are prized for their rich purple magenta color and considered a sacred tree. Syzygium cumini is its scientific botanical name, and it can now be found in tropical and subtropical locations around the globe. An aromatic treasure trove, this tree’s fruits are rich in vitamin C and powerful antioxidants. Several parts of the tree have been used in Ayurvedic medicine for their anti-diabetic effects, a practice strongly confirmed by modern science.

Java Plum is a fast-growing tree, growing up to 100 feet (30m) tall, but typically tops out around 40-50 feet (12-15m) in Hawaiʻi. It is a heavy leaf producer, and the leaf has a prominent yellow line down the center that is visible from a distance away. Their grey bark is also noticeable from far away. Bark is light grey and smooth at the top and rough and dark grey near the bottom. Bark oftentimes has lichen growing on it. The leaves have an opposite leaf arrangement, with young seedlings showing a decussate pattern where 2 leaves emerge and then the next 2 leaves emerge at 90° from the node. Leaves are ovate, unlobed, come to a pointed tip, feel thick or leathery, and have a smooth leaf edge/margin

Flowers are typically in large clusters close to the branch. Generally creamy white, resembling wine cups filled with filaments, and are aromatic with a honey-like scent.  Use your sense of smell in helping to identify this plant; crush the leaves to smell their resinous and citrus-like notes, honey-like scent of flowers, to the smell of fruit rotting on the ground. Fruits resemble olives, ripening to a dark purple or black, forming in clusters along the stem, with a peanut-sized seed inside.

There are some similar plants that might cause confusion, and many plants can look like Java Plum to the beginner. Remember, you only need to know all of the details for correctly identifying Java Plum and then all other plants that don’t fit those details are not Java Plum and you should not eat them. There are some common plants in Hawaiʻi that are mistaken for Java Plum, contact me if you are interested.

Java Plum loves to grow in riparian environments like river beds. It is typically found in mesic (dry) forests, in many tropical and subtropical locations around the globe.

Begin by asking permission. Only take what you will use. Harvest fruits by pulling them from the stem, or use a fruit picker that has a basket with no holes, to remove entire cluster of fruits. Flowers can be harvested using the same method. Leaves are simply pulled from the branch. Bark is best taken from a recently downed tree or pruned branch. Dispose of any unused seeds in a tended compost pile, or in the trash. 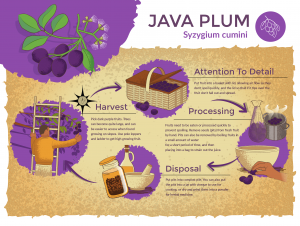 Java Plum is an evergreen tree, so leaves can be harvested throughout the year. Fruits can be found in greatest abundance from late summer to early fall, but there are so many microclimates in Hawaiʻi that they can be found nearly year-round.

Wash leaves, trying not to bend or crush them, and either use immediately or place into a container in the refrigerator for later use. Flower petals are very delicate and can be used for garnish or unique preparations once any insects are removed. Fruits are highly perishable, beginning to ferment within a day or two even in the refrigerator. After washing, they can be used in your favorite recipes fresh or cooked, dehydrated or fermented. To easily remove seeds place fruit into a pot and fill water to same line or just over fruits. As soon as the water begins to boil, remove from heat and place into a fine-meshed strainer or fabric bag to hang and squeeze out juice and pulp. You can also freeze fresh fruits on a tray, then place into freezer bags and store for later use.

Leaves, when crushed in your hand, have a resinous and citrus-like smell and taste which infuses into drinking water. Flowers have a soft, subtle taste and smell. Fruits are sweet, acidic, astringent, and complex in flavor. It is best to avoid eating the fresh fruits on an empty stomach due to their astringency. It is also advised to avoid dairy one hour before or after eating Java plum as milk will bind to the healing tannins in the fruit.

Java plum can add fantastic color to cocktails, desserts, salad dressings and so much more. 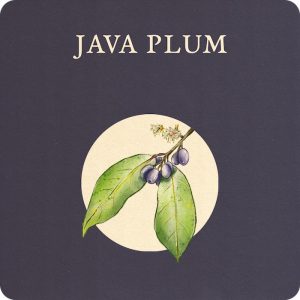