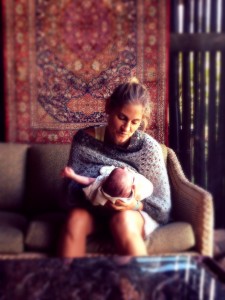 A serene evening, with no wind and a clear sky, was sandwiched between heavy rains and wind. It was on that evening that the old dance between mother, baby, and the great mystery was midwifed again. And with blood it began. Concerned with the blood, a call to the midwives was made and by 7pm I had been checked. No dilation, no contractions, no major concerns. Watch the bleeding and call if anything changes. She went home.

Two hours later at 9pm the contractions came strong and steady. I knew we were on the road of no return and sunk into a breathing pattern that worked wonders. Long inhale in three parts; 1) breathing up and down the spine to extend it, 2) breathing into the lower belly and lower back to fill them, and 3) filling up the sides of the rib cage, followed by long deep exhales. When I would get to the lower belly/back breathing, something would pop and the pain would dissipate. After a 42 labor with my first child I was poised for the long haul, but my husband recognized that things were moving along quickly and called the midwives saying he wanted them there asap. He graciously, and with speed, prepared. Two midwives and a friend showed up at 10pm, where I labored for about 30 minutes and enjoyed being cradled by everyone’s company. The waxing moon shone brightly as it hung in a huge crescent over my left shoulder, illuminating the story unfolding. The sound of surf pounding our rugged coastline a mile below, guided my mind to let the incoming swell move through me. The sweet smell of night-blooming jasmine was thick in the air, riding on a whisper of wind, and scarried a heady remembrance that all would be ok. I only listened to one song during labor, and this was it:

The tub was filled with hot water and lavender essential oil, but I only lasted about 15 minutes before needing to get out. One of the midwives checked me and I was dilated to 8cm. I got back in the tub and then the body started the great clearing out from every orifice. The tub was drained, they hosed me off, and we were going to refill it, but baby decided to come. I was locked into position on all fours and just focused on trying not to push, as it was coming so fast. The sailor with pirate ancestry came out with plenty of swearing, screaming, and panting as I tried not to push. Then, my midwife said, “Sunny, what’s baby’s song?” and I began to sing. A beautiful song that was of the moment, and continued to sing as he came through the canal and slipped into this world surrounded by love at 12:12am on April 6th. Three hours of labor and 10 minutes of delivery. Amen! No tearing. No time to reach delirium. No fear.

I am so grateful for a healthy baby, for the loving support of my husband and midwives and friend Jen, and to live in a time where having a drug and hospital-free homebirth isn’t ostracized. It was so natural and required nothing but trust in the process. I’ve already had messages asking what I did to have such a healthy pregnancy, and I’m proud to say that I ate something wild every day and didn’t go out to eat or eat GMO’s and did yoga regularly, but the fact is that I had more health issues with this pregnancy than the last. The true difference was my state of mind, as I am happy and worked to not let negative thinking reign. I feel that balanced state of mind more profoundly affected my growing of a healthy baby and smooth labor and delivery experience than anything else. I’m also eternally grateful to the plant ally’s along the way, especially rose, for filling in the gaps where pain and fear reside. I can’t help but think that all the wild plants, herbal medicines, and aromatic distillations activated in my son a knowing of the natural world. His wild DNA has been activated, and I will continue to nourish him with a diversity of wild things his whole life long. I want to shout it out to the heavens, but I already did. He came in with a song, and the music shall continue for all of us.